Welcome back to my blog! Today I am going to talk about my second meeting with my mentor. This was our first “official meeting”, meaning that this was not like our initial meeting where we just discussed the subjects we were going to work on. This was a meeting where we got to physically work on those subjects. We had a video call this time, where we talked about music theory. Kayla said that she was going to start me on some easy theory because I have not learned any kind of music theory since I did piano lessons when I was a lot younger. She taught me about intervals! There is a lot to learn about intervals, however, we started with the basics.

An interval is a difference in pitch between two sounds. They showed me examples with pictures which I found very helpful.

In the image above, there are intervals on a musical staff. They are labelled as 2nd, 3rd, 4th, etc. because that is how many semitones* apart they are. Counting the space and the line (including the line or space where the first note is), you can count how many semitones a note is from another.

For example, let’s look at the 6th interval: This is my poorly drawn description of how to count intervals. You can see that the blue starts on the line where the bottom note starts. You then count up including all of the lines and spaces until you get to the space where the top note is. The red numbers represent the lines and spaces that you are counting. It ends at six, which means that this interval is a 6th.

During our meeting, the term semitone kept coming up. I realized that I didn’t know what a semitone was, I had only heard of it. It turns out that a semitone can also be called a half note or a half step. It is hard to describe in words, so I will show a picture to help describe it. 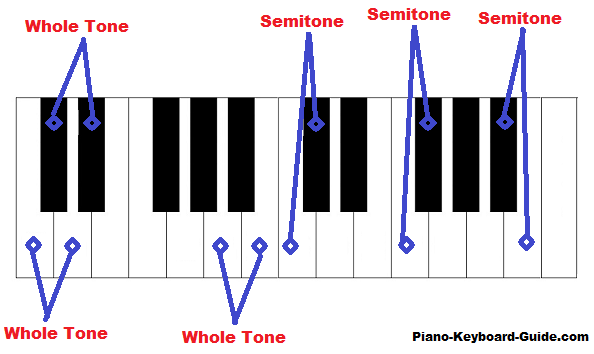 Finally, we discussed what I was going to work on before our next meeting. Kayla told me to listen to songs on the radio, and just consider what the moods of the songs were. Since I only just recently had learned what intervals are, I would not be able to identify intervals in songs, because that is something only a very musically trained person is able to do. So I have notes on my phone, where I just listen to songs when they are playing on the radio, and I write down observations I make about the mood of the song, and if it sounds minor or major/sad or happy! I will continue to do this until our next meeting.

Thank you for reading my blog post! There is not a lot of information that I could have written about today, but that is because we just talked a lot about one topic, since we are going to be building on it for the rest of the lessons.

See you next time!!